David didn’t like goodbyes, but I’m afraid he can’t escape this one.  His family and friends that have gone before were probably organizing a welcoming committee and trying to remember his favorite brand of beer. 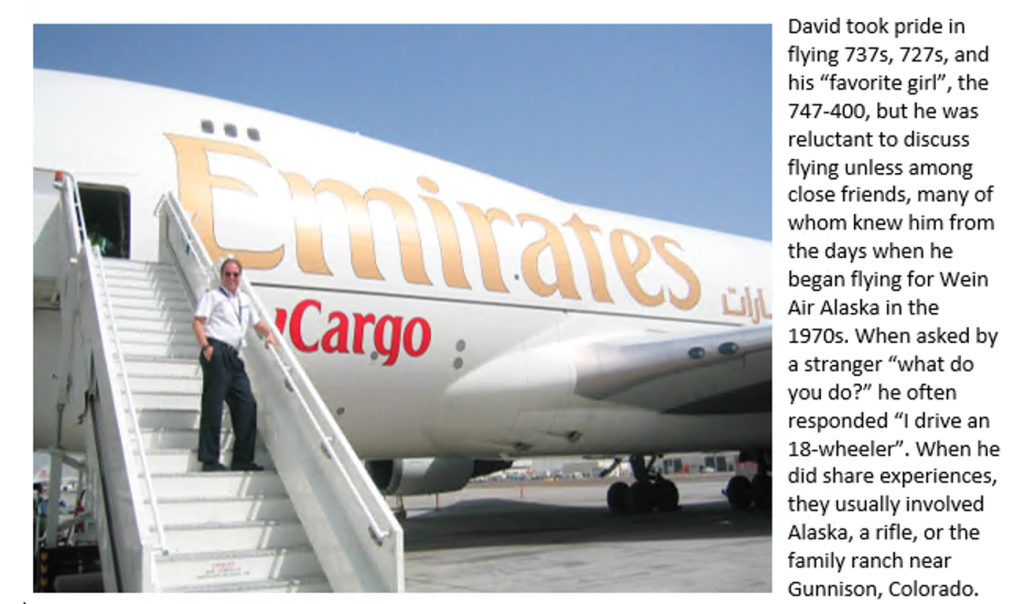 David had a devilish sense of humor and was not above playing a trick on a friend; maybe you even owe him one.  A co-pilot, Rob Lambert, shared this story:

David was my friend for nearly 50 years. We went through the best of times as pilots. For some reason, Dave thought he was the world’s greatest comedian. One of my favorite memories occurred about 46 years ago. We were pilots in rural Alaska. I am on the short side, vertically speaking, while Dave was 6’2” tall. One morning I came out to get in the airplane for the day’s flying. Dave was the Captain, I, the co-pilot. As I went to climb in my seat, I noticed a phone book on the seat. I thought to myself, “that’s strange”. I sat down, and went to adjust the seat. At this point, I noticed blocks of wood on the rudder pedals. I looked out the cockpit window, and there was Dave, with most of the other pilots laughing so hard, I thought they might have an accident. Like I said, I think Dave felt that if aviation didn’t work out for him, he would just become a standup comedian. I will miss my friend, and hope he is staging a good comedy routine.

Besides friends, David also had amazing relationships with his younger sisters.  Shelley (the baby of the family) says that when she was six, David chained her to a toilet, and on another occasion shaved the head of his sister, Debbie.  Military school was in his future!

David Gates was a presence, an undeniable force, a respected, intelligent and complicated man.  He was also funny, self-deprecating, and stubborn, but was always willing to help a friend or a neighbor.

Please share memories and stories; he told me a lot of stories about all of you, but my lips are sealed.

If you wish to make a donation in his memory, David contributed to the Wounded Warrior Project and was a great supporter of dog rescue organizations.