Born August 17, 1930 in Wellington, Kansas; she was a loving mother and grandmother and an avid sports fan. Her home was filled with sports memorabilia and pictures of her children and grandchildren covered her walls. In later years, she received great joy from following the antics of her grandchildren and great-grandchildren’s lives via social media that they taught her.

She was preceded in death by her parents; Leroy Marvin and Thelma Rose Miller, her husband, Archie E. Shaw, and her siblings; Billie Doris Kabureck, and Kenneth Leroy Miller, and her granddaughter, Michelle Dawn Carey.

Dorothy is survived by her children; Vickie Church and her husband, Phillip Church, of Wellington, Mickey Axtell-Mauck and her husband Don Mauck, of Aurora, CO, Allen Gray, of Henderson, NV and Doris Aline Gray, of Denver, CO.

As a beautiful teenager, Dottie helped at her mother’s hamburger stand near the railroad tracks, serving the troops passing through the whistle-stop of Wellington, Kansas during WWII. She also worked at the Cat ‘n’ Lantern in downtown Wellington.

She moved to Denver, CO in 1960 and worked as a waitress in several restaurants: White Spots, Denver Dry Goods Tea Room, where the Denver Tea girls were called upon many times to do catering events for celebrities, she once served Frank Sinatra, and Valente’s Italian Restaurant, where her kids were regular customers. She was a semi-pro bowler in several leagues at Celebrity Sports Center and was once crowned the “Duchess of Denver”. She was a lifelong Denver Broncos fan and loved all the Colorado sports teams.

She moved to Las Vegas in 1990 with her husband, Archie, and became an avid Golden Knights Hockey fan. She developed a close relationship with her neighbor, Monica, who became her Las Vegas “daughter” and gave her the best present she says she ever received, her beloved cat, Dixie.

She lived the last 20 years of her life with her son, Allen, who became her caretaker for the last few years in Henderson, NV. She was a great supporter of the St. Jude’s Hospital. In lieu of flowers or cards, please consider donating to them in her honor. 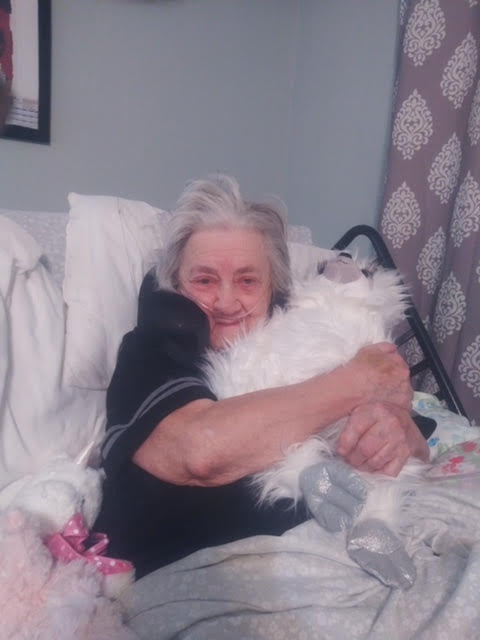