2 years ago
James (Jim) Elmer Masden, age 47, passed away of natural causes on November 1, 2020, in Las Vegas, NV.
Jim was born to parents Frank and Barbara (Schall) Masden on April 25, 1973 in Lake Havasu City, AZ.
Jim started his life being someone people would always remember. He was the first boy born in the hospital, in Lake Havasu City. While growing up in Lake Havasu, Jim and his family enjoyed bowling. In high school, Jim bowled his first 300 in his hometown. He was part of the AVCO National Family Doubles Tournament in 1988 with his Dad and 1989 with his Mom. His junior year of high school, Jim was a Rotary foreign exchange student. In 1991, he graduated from Lake Havasu High School. In 1996, Jim joined the Golden Key National Honor Society. He graduated from the University of Nevada Las Vegas in December of 1996 and later went on to earn two master’s degrees from the University of Phoenix. Jim was an educator in the Clark County School District (CCSD) for nearly 24 years. While working in CCSD, Jim received many accolades. He was nominated for the Disney Teacher of the Year in 2003, Walmart Teacher of the Year in 2004, Distinguished Star Award for Performance Zone 11 in 2014, and was recognized in 2016 and 2017 for the Heart of America Award. He also had perfect attendance for most of his years with CCSD. Jim will be remembered by so many for his dedication to his students and their families. He once said, in a July 27, 2018 article for the Las Vegas
Review-Journal, “I feel like what I’m doing is right. I’m doing what’s right for kids. There’s no ulterior motive.”
Anyone who knew Jim loved his sense of humor, his love for teaching, his love of watching his students succeed even after he taught them, his support of his students with their sporting events and all of their accomplishments, his love of all things Disney and Funko, his love for Harry Potter, his love for the Boston Red Sox, his love for graphic novels, his love of IKEA, his love for his family history, and how much fun he always had in life. You always knew where to find Jim on a Tuesday night – Grimaldi’s! He enjoyed going there to get his pepperoni pizza, half off wine, and visit with friends. He would always get a Nothing Bundt Cake for himself and the bartender’s kids. Jim was truly a great guy to everyone and never met a stranger. As some have said he was their first friend and was always there to help.
Jim is survived by his mother, Barbara Masden, of Lake Havasu City, AZ; Brother, sister-in-law, and children, John and Barbara Masden (James, John Jr., Mary, and Steven), of Lake Havasu City, AZ; Sister and brother-in-law, Jeanette and Dave Brown, of San Diego, CA; Sister, Jayne Masden, of Henderson, NV; Aunt and Uncle, Nancy and Lenny Moschcau, of Kingman, AZ; Aunt, Katherine Masden, of Madison, WI; and many cousins.
Jim was predeceased by his father, Frank D. Masden, Jr. (1998).
A memorial service and celebration of life is scheduled for December 5, 2020 at 10:00 a.m., at Central Church, 1001 New Beginnings Dr., Henderson, NV 89011 and on December 12, 2020 at 11:00 a.m., at Community Presbyterian Church, 3450 Chemehuevi Blvd., Lake Havasu City, AZ 86406. Please join us in remembering and celebrating James, Jim, Jimbo, Uncle Jimbo, Uncle Jim, Jimmy, Mr. Masden.
In lieu of flowers, donations can be made to our gofundme – Memorial Fund for James Masden. We are raising funds for a buddy bench, planting of a tree, and having a section of the library dedicated to Mr. Masden at Wayne N. Tanaka Elementary School at 9135 West Maule Avenue in Las Vegas, NV 89148. We want to honor Jim’s dedication for the children and to remember his love for teaching. 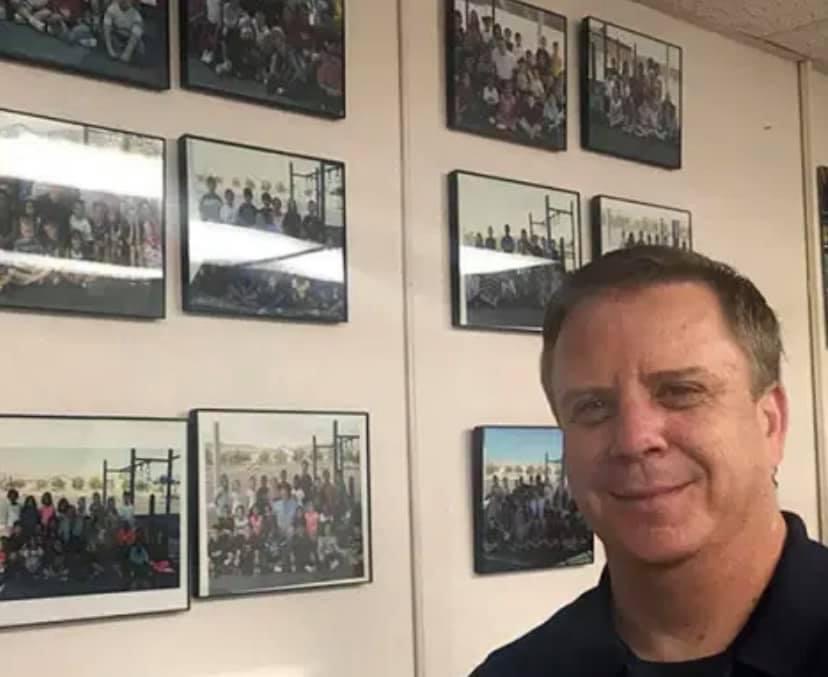